Judging by the hundreds of people who stood in line up to three hours on Monday, Houstonians are very excited about Austin-based burger juggernaut Hopdoddy Burger Bar’s arrival in River Oaks District.

In town for the opening, co-founder Larry Perdido (a Houston native and Strake Jesuit alum) concedes it’s taken the company too long to arrive in Houston.

“It’s something I’ve wanted to do since year one — once we figured out we could scale this thing,” Perdido tells CultureMap. “We’ve come close to having a couple of spots here. We should have been here about three years ago.” 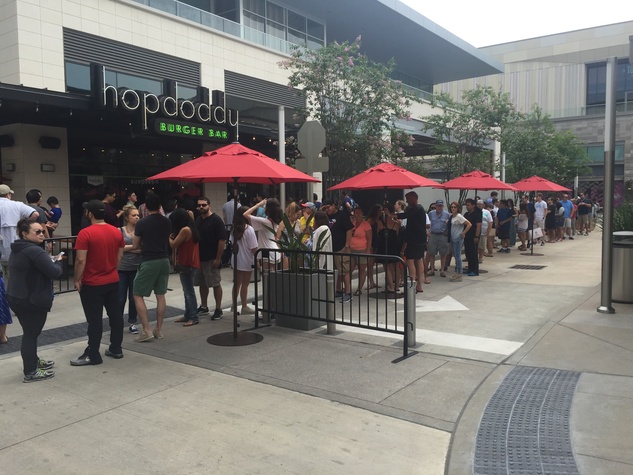 Brand manager Erin Fohn notes that Houstonians have been asking for a location since the first location opened in 2010. “It took us this long to find the right spot,” she says, but plans for at least one more are already underway.

The company’s second location will be in Rice Village, Perdido confirms. While he wasn’t ready to confirm a timeline, opening next year would put Hopdoddy head to head with Houston’s second Shake Shack location to make the shopping area a must-visit burger destination.

While Houstonians will have to wait a bit for that opening, no one seems to be holding a grudge that it’s taken so long for the first one to arrive. Fohn said the line, which snaked in front of Hopdoddy before turning a corner at the new outdoor shopping center, was the longest she’s seen at any location’s opening day. A dream deferred is not a dream denied — at least when it comes to hamburgers. 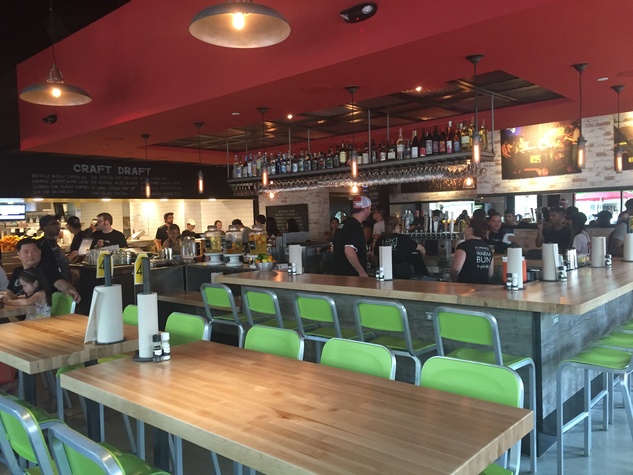 Thankfully, the restaurant has grown pretty adept at managing the lines. A dedicated server offers diners the chance to get drinks while they wait, and the kitchen sends out a constant stream of samples of both fries and shakes.

“The first person who doesn’t get a sample because we ran out gets the cowbell,” Fohn explains. “When they order, they get free fries. That happens all day.”

Once they reach the end of the line, diners will find a wide selection of burgers awaits. Choose from beef, chicken, turkey, tuna, or veggie patties. Both traditional and gluten-free buns are available, with a wide range of toppings. Fries come plain, topped with parmesan and truffle oil, or alongside queso (either regular or green chile).

While all of those things sound pretty familiar, Hopdoddy sets itself apart by its control of the process. Buns are baked on site — the aroma of freshly baked bread occasionally wafts into the dining room — and all meat, hormone and antibiotic-free, natch, is ground in-house.

In addition to the expected sodas and shakes, Hopdoddy offers a full bar, as well as craft beer and wine. A frozen margarita costs $7, and most of the rest are either $8 or $9.

Perdido says diners can start with one of the company’s beef burgers, but his favorites are the Continental Club (a turkey burger with bacon and provolone) and the Ahi tuna.

“Those are my two that I personally eat (and) some of the salads. When I designed it, there are definitely different categories to hit. Some are very cheffy or foodie in design. The akaushi (beef) is very decadent, very rich,” he notes.

Whatever the order, Houstonians are obviously excited about the city’s newest burger joint. While the opening day line probably won’t be repeated, don’t expect to walk right in, either. Everybody wants a first bite of a Hopdoddy burger.

Hopdoddy opens daily at 11 am.